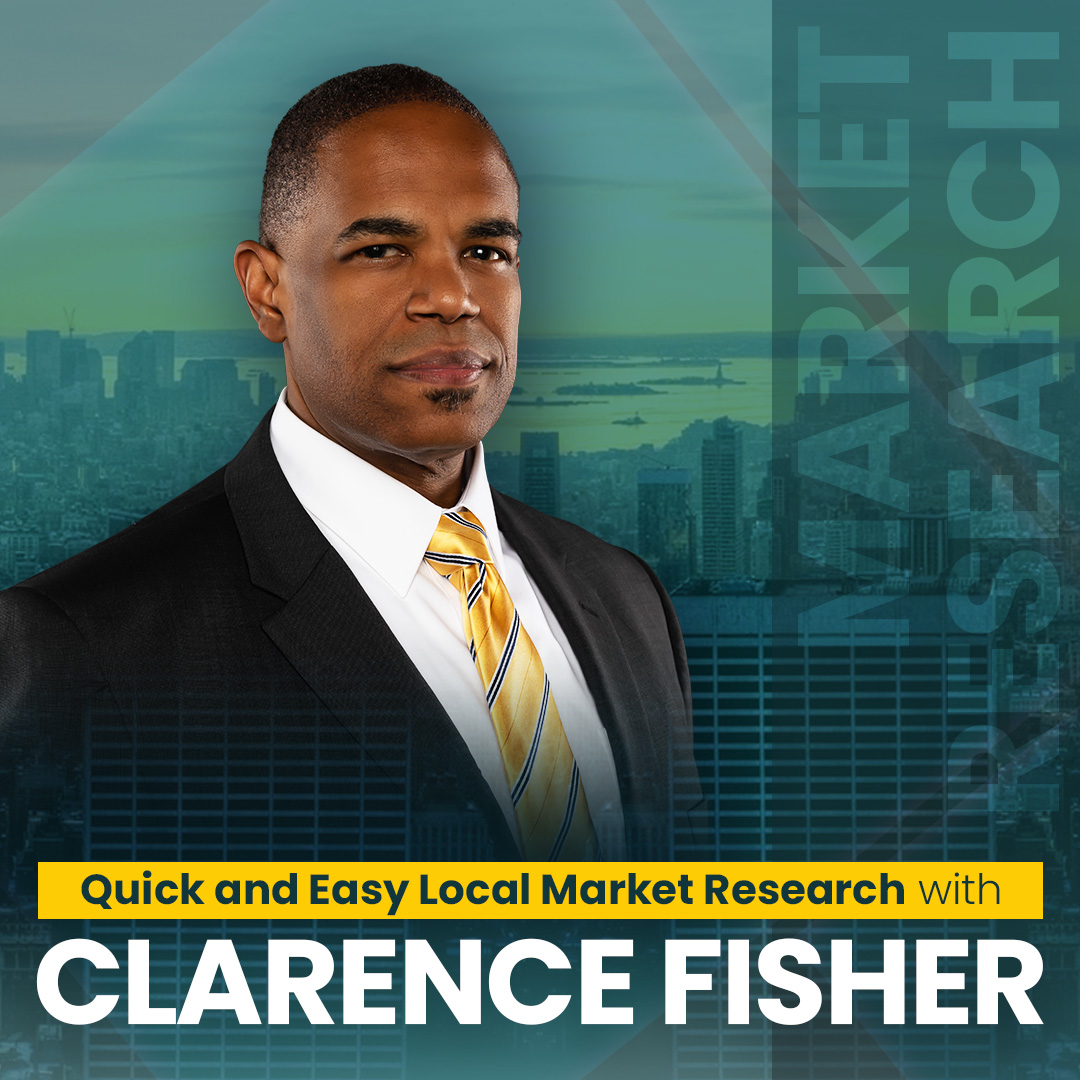 Disclaimer: The transcription below is provided for your convenience. Please excuse any mistakes that the automated service made in translation.

Clarence Fisher: Welcome back to the Local Market Monopoly. I am Clarence Vischer your host, not visa, but Fisher. This is where you're going to talk about market research. Think about it. We really do need to dig into our market and see where some opportunities are and if how we measure up and what holes we can feel, you may be thinking you can't do the market research that you want because you don't have the money to do triple-double con triple bypass, not bypass, but blind studies where you bypass, or you might not be able to send out 5,000 postcards and get those surveys back to see what people think. But there are some surprisingly affordable, some even freeways for you to find out what your competition is up to and how you can beat them. Hang on. We'll be right back.

: You're listening to local market monopoly with Clarence Fisher, uncovering the tills tactics and strategies. The most successful small businesses use their local market. And Oh,

Clarence Fisher: Okay? You want to put down their name, you want to put down the URL, and this way we can see who is in the game. Who's winning because you know, when you jump in, you want to take, like you want to, you know, take a shot at the first person. Like who are they? So let's go ahead and type it in very few people do this. I didn't do this for the longest time. It's just hard. It's too busy. I was like, I don't care what they're doing around wrong. That was so much a bad decision. But we did go back and you start writing down the top 10 of this, of the organic. And then while we're there, we're going to look at not while we're there. Go ahead and do that first. Then pull out another sheet of paper. I know you're like, I don't know how many pieces of paper this is going to take.

Clarence Fisher: Maybe three, four, maybe, maybe can. You can, you can afford that. So get another piece of paper. And now we're going to write from one to 10. Okay. I know it was taking a little bit of time. I get it. Just take, just take your time and do it. And now we're going to look at the top 10 paid competitors. Okay. So right now, you know, Google has the three at the top, and then you may have some, some folks who were being super duper about their business and they've got ads running in the actual Google, my business. That's a thing. We'll talk about it later. And then you have people down at the bottom below the organic search results. Find the top 10, write them down there, and take note of their URLs. You may want to take a screenshot of the ads, look at what they're looking, what they're advertising, what's the offer.

Clarence Fisher: And then especially on paid ads, you, you know, you've got the headline, what's the headline and the offer that they're giving you. And then also pay close attention to the space that their ads are taking up. What benefits do they have in that ad? A lot of people will have four or five, six, seven different benefits in one ad. You want to take note, and then we're going to go to a tool that we use quite a bit in our business. And it's pretty inexpensive. It's only like a hundred bucks a month, I think, but it's called S E M rush. If you go to the show notes, we'll put a link there, S E M a rush. And in this, you want to take your number one competitor for sure, but put them in the, in the at the very top in the middle, there's going to be a spot where you can put their URL and hit the go button.

Clarence Fisher: And it's going to pull up as much as they possibly can find about your competitor. I mean, this is like super down dirty. And if you don't want to expense a hundred bucks, you can sign up for a free trial. I think it's like 14 days and get the info you need. There's also another one called another place called follow.net. It's not as comprehensive as SEM rush, but you can type in your competitor's URL and follow that net as well. And, and you know, you can see the banner ads are they're running. You can see the, I don't think they, they show you the top. It's funny. They don't show you the top one, two, or three ads that they're running@follow.net. They show you ad number four or five or six. That's how they get you to pay for the prescription, the subscription so that you can see numbers one, two, and three will follow.net is one.

Clarence Fisher: If you can swing it, do SEM rush. It's kind of like the gold standard right now. And you can I mean the SEO data that is just crazy. And then it'll, it will also get this. It will also do an analysis for you and spit out all the changes you need to make on your website, the onsite SEO, as well as you know backlinking and you know what, where to go, what to do. It's amazing, I'm giving you Tracy grasses, shut up. You're gonna, you're like no, no, this is why we do this podcast so that you can, I can give you these secrets, but go ahead and do it and do SCM rush, but check out, pay close attention to the audience. Demographics who is their audience, their audience is your audience. If you're a chiropractor and you're you put your competitor in there, your audiences, their audience, but who are they attracting pay close attention to how they are trending.

Clarence Fisher: If it's trending more male than it is female or vice versa, what are they into? Whatever those demographics are, then pay, pay attention to that. What are there, what is their age? How old are they? Do they have children, two children, one and a half children that always give me one and a half children? So think about this. We're going to look at income. We're gonna look at education, what ethnicity, which is been a bad word, I guess, here lately. But in marketing, I'm going to tell you, I tell everyone this when I'm sitting in their office, look, we need to call it what it is. Who are they? Are they black? Are they, why are they, whatever, don't be afraid of. It just, you only have so much money. Okay? We don't have money like Coca Cola and Pepsi and all those people where it's like, we're just going to run ads just to be running ads and whoever they do a little more targeted that whoever sees it, sees it.

Clarence Fisher: No, we have a limited budget. So we want to make sure that our ads are in front of the exact ideal client that is going to purchase our service. I don't care who they are. We need to figure out who they are and we're going to take our loan money. And we're going to put our ads and our messages in front of them. And we're going to catch a lot of them. So do not be shy about who they are. That's the customer avatar. If you haven't listened to that episode, go back and listen to it and figure out how to put together your customer avatar. So this episode is a short episode because you have a lot of homework to do really go in just really quickly. Write down your top 10 SEO competitors. Then write down your top 10 paid competitors. Two places I want to send you.

Clarence Fisher: One is S E M rush.com. Sign up for free, a free account that's at 14 days, and do your research. And if you don't want to keep it, don't keep it. If you think, you know, it may help you, then somebody on your team, then go ahead, subscribe. Also, go to follow.net. Now there is a lot of other software that you can use, which I think will help you out. You know, the more you dig into it, the better, but definitely do those two. And if you have any suggestions, go to Clarence fisher.com and there's a tab at the top, right? That says, ask Clarence, and you can leave me a voicemail. You don't have to ask me anything. You can tell me anything. Just don't tell me off. Actually, somebody did that a couple of weeks ago. It was funny. It was, it was funny, I guess, I guess as long as we're talking and we're talking, right? So do your market research. Let me know what you think. Like comment, take a picture of it. Posted on Instagram, tag me, post it on Facebook. Tag me, write me a letter or whatever you do, make sure you own the block.

: We appreciate you listening to Local Market Monopoly and visit Clarencefisher.com for more resources that will help you dominate your local market and own the block.

Scroll back to top
powered by

In this episode, we will discuss the overall impact that market research can have on strategic decision making in today's business landscape, and why market research is absolutely critical to local business success.

Listen here to discover the most effective ways for you to find out what your competitors are up to and how you can beat them.